Today we headed to Bronte Creek Provincial Park (BCPP) as there's been some recent sightings of Long-eared Owls in the area, and at a mere 25 or so minutes away via highway it's the closest Provincial Park to Hamilton. I was pretty surprised how quickly we got there.

BCPP is divided into two sections: a campground, and a day-use area. The day-use area appears to be the largest area, and boasts a lot of natural and historic attractions. There's a number of trails, most of which lead to the ravine which contains Bronte Creek. It would probably take most of a day to hike all of the trails here, at least according to the park's own time estimates. We found these estimates to be a bit high -- perhaps we're fast walkers, but trails reported as taking an hour to walk took almost half that. So, walking all the trails here might just be a bit more than a half-day.

The day-use area has some odd attractions -- a heritage farm (I guess growing up on the country makes this seem odd to me, likely makes sense in an urban park), a woodland trail that can be roller-bladed, and a whole area devoted to amateur remote-controlled aircraft flying. In retrospect these all seem to make sense, but are unexpected to someone who's been only to provincial parks that mostly stick to camping and hiking.

As we entered and drove around to find the right lot to park in for trails (it was unclear), we saw two Red-tailed Hawks parked on branches, as well as a Kestrel swooping down to catch a meal from the grasses. There are certainly lot of raptors here!

One of the problems we had here was knowing what trails went where. From the parking lot, there's some vague signs about where the trails are, but once you're on a trail you have no idea which one it is. The Ravine Trail, which we eventually found on a map online (iPhones and such are a great tool for finding published maps whilst on the trail) it was still pretty vague as-to where the trail really started. It turns out the Ravine Trail basically runs all along the ravine, but only some of it is on the map. Once we hit a "administrative personnel only" sign, we knew we had hit the "unmapped" part of the trail, and headed back to where the trail was marked on the map.

You might be thinking, "but, that trail is on Google Maps!". Yes, it is now, as I'm the one who added it!

Keeping our eyes up in the old growth trees along the ravine, we unfortunately didn't catch any glimpses of owls -- or really any birds at all for quite a while. Eventually there were a few chickadees, but that was about it!

There were some nice views along the Ravine Trail -- old hemlocks and sugar maples, and a vista point overlooking the Bronte Creek ravine. We also walked some other trails -- such as the Logging Trail which takes you along an old logging road for a short walk.

Just before returning to our car though, we found a huge old White Oak tree, fenced off to keep anyone from potentially damaging a root. The tree's trunk is about 1.5 metres across, and stands 20 metres tall. It has been estimated to be almost 300 years old, dating back to the early 1700s. This is a nice point to end a walk at, even without any owls found!

Upon leaving we actually encountered, while getting back onto the highway, a Coyote alongside the road! Unfortunately we weren't quick enough to grab a camera, and once you get on a ramp you can't back up, so it was a very brief encounter. I wouldn't have guessed that BCPP was big enough to really support a species such as a Coyote, but perhaps it and a few surrounding parks are enough for a few to survive and perhaps thrive. 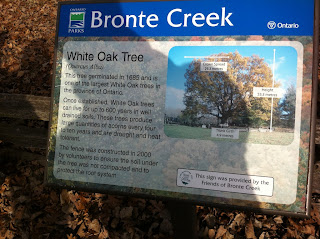 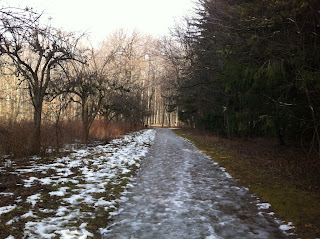 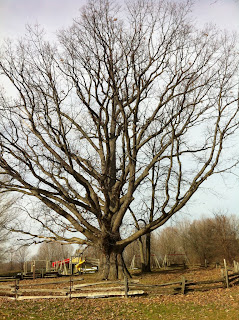 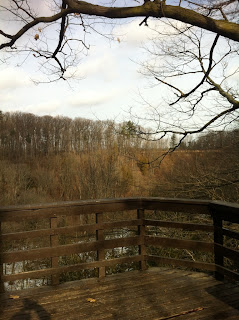 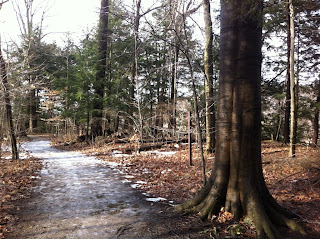