Today's hike was two full trails: the Bull's Point Trail, and the Marshwalk Trail, both at the RBG's "North Shore" trail system.

Considering it's winter, I've had a pretty easy time hiking so far. Outside of having to deal with some slippery slopes at the start of the Caleb's Walk trail, there's been very little snow or ice to deal with as far as obstacles go. So far, it's like hiking any other time of the year, except with harder ground.

Bull's Point Trail is a longer trail than I expected. I have gone through here a few times before, but never went all the way to the look-out at the point -- at least, I don't remember having done so. There's been a nice look-out tower built at the point recently, and perhaps if I was here at some time in the past fifteen years it was before the tower was built. It's quite a nice tower, with a great view of the whole of Cootes Paradise, all the way to the multiple bridges at the highway. (There is also a tower just off the Bull's Point Trail at about half-way just down a short side-trail. I've been there before, and will likely go take a look at it again in a future post.)

One of the things I've had to try to get past while taking these daily hikes is "what if something goes wrong at work while I'm on a break". Strangely enough, something went wrong today, but thankfully could be resolved over the phone. It used to be that when you went out for a walk, a hike, a bike ride, and you worked in an industry dealing with computers, you were taking more of a risk. These days with smartphones, there's an awful lot you can do remotely to fix problems! The mobile revolution really has untethered people like me from desks.

On the way back I took the short detour that is the Marshwalk. Most of this trail is actually just a normal trail, not marshy at all, but once you reach the shore, the trail shoots out through the tallgrass prairie, above the grass via boardwalk. Here some very friendly chickadees became very annoyed with me as I allowed them to come land on my arm (as they like to do here) but didn't have anything to feed them with. After one landed and wasn't fed, it appears he basically told the rest and I couldn't get anther one to do anything but tweet disapprovingly at me.

A nice surprise on the return path: atop a leafless tree were several American Robins, which are around but harder to find in the winter. With this small group, there was one unusual robin with a white breast. It didn't appear to be any other kind of thrush (the bird family robins belong to) as its morphology appeared equivalent to any other American Robin, save for the white front. All I could ever find out after some later research is that this is completely possible, just rare.

If only I had a nice camera at the time to take a good picture... someday soon, new camera! 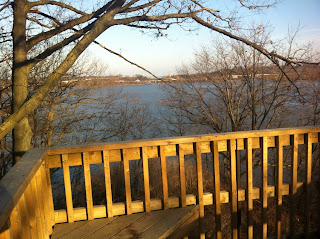 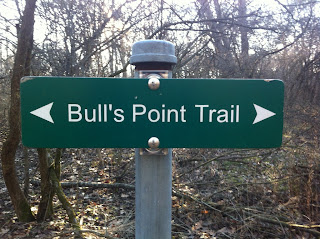 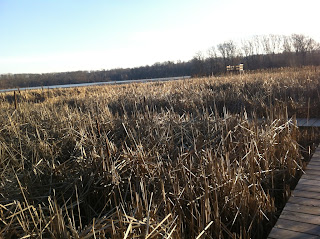 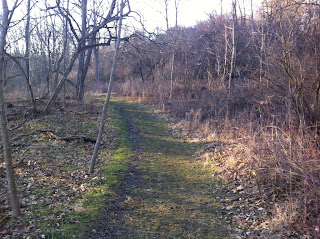