Location: West Pond Trail @ West Pond / Dundas "Hydro" Marsh in the RBG's Cootes' Paradise Sanctuary
Getting There by Transit: Take the HSR Bus #5 to "Cootes at Dundas" stop next to Canadian Tire, walk along Cootes Drive pathway to Olympic Drive
Getting There by Car or Bike: Park opposite the end of King Street East (Dundas) just off Olympic Drive
Species of Note: Tallgrass, Clonal Colony of Willow trees, Black-crowned Night-Heron, a white hybrid Mallard, and a Belted Kingfisher
Obscurity Rating: 3/5 - Not well signed, trails unmaintained and unblazed, more known to birders, fishermen and teenagers. Difficult to find trail when tallgrass is growing.
Data: eBird Checklist

If there's one place you can nearly always go to see many birds, it's the West Pond in Cootes' Paradise. This pond is a part of the former canal that ran from Lake Ontario through to Dundas in the mid to later 19th Century, and is an important protected wetland that is host to too many species to name. If you're looking for Swans, Great Blue Herons, Night-Herons, Kingfishers, or the rare Pelican, this is where to go.

The trail itself is not signed, and is most likely remade each year by active human visitors. The grass here is tall -- very tall. Tall enough that this hiking experience is like nothing else in Hamilton -- you can't see a thing but grass for most of it. Unfortunately it's a pretty short trail, so the sense of disorientation doesn't last long. Sadly this is one of the last Tallgrass Prairies remaining in Southern Ontario, and it's pretty small.

I was surprised to come across a line juvenile Black-crowned Night-Heron today. These odd looking birds are often perched up trees near Spencer Creek during the summer, to see one in winter around here is a bit odd. I wonder if this kid got lost or left behind in the migration, though a quick search through eBird reveals he's not the only Night-Heron to stick around for the winter so far.

Immediately after identifying this young bird, I saw something rather odd: a white-ish Mallard. Not completely white, so not a domestic duck, but the colours on the duck were nearly all washed out to a creamy brown-ish white. After getting home and reading a bit more online about Mallards, apparently they cross with a lot of other species, and aren't too picky about who or what they mate with. That said, it's not entirely clear what could have crossed with a Mallard (other than a pure white domestic Mallard) to produce this colouration.

Since I am writing this post in retrospect about a month after this sighting, I'll also add that I returned to this spot a few more times, always finding this duck and its male Mallard mate. What I know so far: it's certainly a female, it's skittish around humans (always runs away, is never at the spots where people feed Mallards across on King Street E), and this pair doesn't hang out with the other Mallards much -- they always seem to be off on their own.

At the end of this trail lies a colony of willows. If you spend some time looking at the Willows you'll notice something rather interesting: while there appears to be several Willow trees, there's likely only one or two unique individuals here. The rest are clonally reproduced through a process known as layering. There are spots where you can see that a trunk has sunken into the mud, only to root and grow upward again as the portion connected to the original tree has rotted away. Willows can pull this technique off to keep themselves theoretically alive indefinitely, as long as the environment can sustain them. These trees could be originally from a seed sprouted as early as the thaw of the last Ice Age, for all we know. Willows and other trees can also "walk" by doing this, continually falling over, re-rooting, growing up, then falling over and re-rooting again.

Just before I left the last of the trallgrass to head home, I caught both ear and eye of a Belted Kingfisher -- a normal sight any other time of the year, somewhat rare in the winter though. I guess after several years of mild winters, some of these birds are trying to adapt to the new norm, only to be stuck in cold conditions whenever the climate does act normal for once. 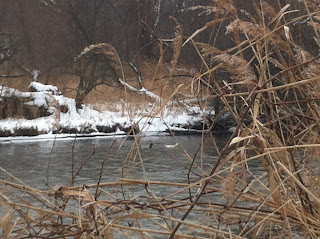 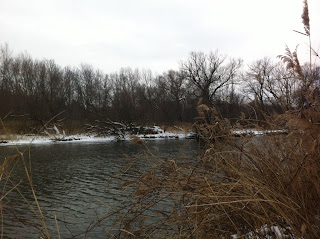 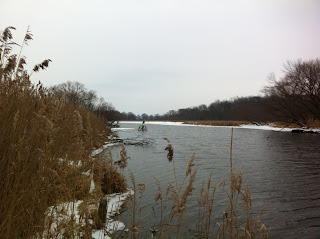 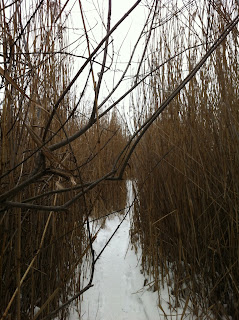