View Larger Map
Location: Lafarge 2000 Trail @ Concession Road 6 W, Flamborough
Directions: Heading out of Dundas, take old Highway 8 towards Cambridge, then turn right at Middletown Road. Take Middletown all the way to Concession Road 6W, and park at the intersection.
Species of Note: White-tailed Deer
Obscurity: Medium-high - not many know about this trail, and if they found out about it by coming to this section, they might sooner wish to forget about it
Data: GPS Track

If you like climbing steep trails, you'll love this section of the Lafarge 2000 Trail. I can't imagine how this was ever used as a road. Even with the winding switchbacks, it's a steep hike. You'd have to be in amazing shape to reach the top here and not be at least somewhat winded.

What's more amazing about this hike today though, was that apparently some yellow tape at the entrance of the trail was supposed to indicate the trail was closed due to a bridge being out. OK, even if I knew, I can always just turn back once I get to the bridge, no big deal, right? Well.. here's what apparently was enough to close the trail, officially:


As you can see, the bridge is merely a boardwalk, about 2 meters long at most. Since vehicles aren't allowed on the trail anyways, I figured there must be some serious water underneath that boardwalk...

So, I'm not sure what the HCA was thinking when they announced the trail is closed. If you can walk up the steepest hike in all of Flamborough, you should probably be able to step over a creek that's a wide as about a quarter of an average stride. Maybe, if there was a slight off-chance someone on a scooter could ever possibly get to this part of the trail, I could understand it being closed. Weird!

Just as I went to turn back at the half-way point, I saw a full herd of deer running up the next hill. 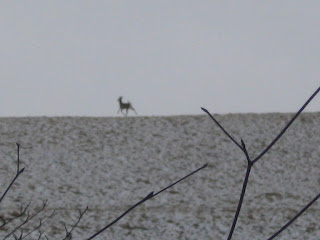 All-in-all it was at least 15 deer that saw me and split off into two groups. This is certainly the largest single herd of deer I'd ever seen, though I've seen more in separate encounters on a single hike in Dundas Valley before.

In any case, I've now walked from both ends of this grueling section of the Lafarge 2000 Trail. Someday a full walk from end-to-end and back of this section would be nice as an endurance challenge (3 hills, 2 of them very, very steep would make for a lot of exercise).

And now, to end with a view of the trail down the hill...