Redpolls and Kinglet at Sassafras Point

North of the village of Westdale hides numerous hiking trails within the RBG South Trails section of Cootes Paradise. Over the years of being a student at McMaster I've hiked many of them, and this year it's been fun to return and experience these trails once again.

As a side note, I've decided to take a different approach now with the blog. Instead of daily hike logs, I'll be going with occasional posts with the most interesting hiking experiences. Daily was just too often (I was getting a month behind!) and this way I can focus more on the quality than the quantity.

It was an early cold, wet, and icy February morning and I took aim at one of the last trails I have left in this section of Cootes for this winter. Sassfras Point Trail is a short trail that begins half-way down another trail, the Ravine Road.

What ended up being most interesting about this trail on this day wasn't the hike itself -- it was rather rough due to the wet ice, but some wilderness encounters in the first few metres down the trail! Half-way up the first hill I spotted numerous finches -- namely some American Goldfinches, and Common Redpolls.

Having recently (and finally) bought a new 20-times-optical zoom camera, I spent some time getting some decent pictures of the birds. Redpolls are winter-only birds for this region, and tend not to show up in urban and sub-urban feeders as often as goldfinches. This makes them a bit more rare, and a bit of a surprise to see so close to Westdale. 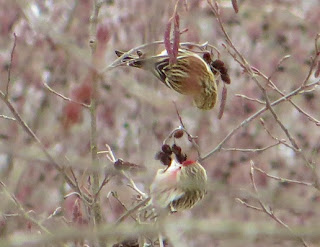 After a few minutes of photos I noticed several large dark figures in the bushes below -- some White-tailed Deer, resting! Usually in Hamilton, if you come across deer they're either grazing or running away. Just sitting there staring is a new one for me.

Finally, in the photo-taking I discovered a nice side-effect of taking lots of photos -- discovering I actually saw another bird species I hadn't ever seen in the winter before, and didn't notice when I took the picture! This next picture is of a Golden-crowned Kinglet, not a goldfinch as I had thought at the time. Had I been paying enough attention at the time to the bird rather than the camera, I probably would have noticed this goldfinch was rather small... 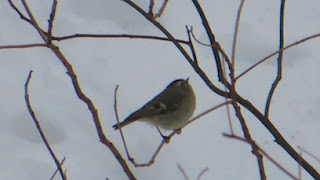 Sadly the time spent with all these animals meant that I could not complete the whole trail on time. Having a meeting early that morning I needed to make sure my hike didn't go over a certain length of time, so I only completed about 80% of the trail. I will be back again, likely in the spring to get a good look at Sassfras Point.