Having taken a couple days off and having also decided to not travel far for those couple days I came upon the idea of finding a nearby (an hour or so away) park where I could spend a couple days doing long hikes and also feel productive at the same time. As I searched out some data about various parks in that one-hour-away-from-Hamilton zone, I came across Short Hills Provincial Park.

Short Hills felt perfect -- being an hour away it was not something I'd be able to go hiking in unless I had a full day off anyways, and it's a nice big park where there are many trails, but what was most attractive was that there were two trails that required three-plus hours to fully hike. Also, these trails are not yet on Google Maps. They will be after these hikes though!

Taking a look through eBird to see what to expect in March, I was surprised that such a great spot for birding was lacking in data. A quick report generated by the eBird system indicated only 22 species of bird had ever been reported as observed in the Short Hills. Surely there must be more!

On day one I started with the south entrance along Roland Road. This entrance has a short (30 min) double-loop trail designed for physically challenged hikers, leading to Swayze Falls. This trail contains the only interpretive signs I saw in the entire park, which is a bit odd as this entrance seemed more like a "side" entrance to me. It's a nice hike though, albeit confusing due to the double-loop and overlapping with two other trails at points.

It was here that the first previously unreported species of bird was heard: a Long-eared Owl! Following the trails as far as they would go, I could not find the owl to spot it, but it was very active throughout the day as it was still hooting along later in the day just before I left. I was tempted to go off-trail and see if I could find him, and I might have done so had I not misinterpreted one of my mapping apps (I might get to blame Apple Maps for this!) for convincing me there was a road over where the owl sounds were emerging. I went back to the car, looked for the road, but did not find it. Sadly this owl was not present in the morning of day two. Oh well.

This trail by-far is the longest single-hike of a loop trail I have done in quite a long while. Starting at the south entrance with the Palaeozoic Path, this trail pairs with the Bruce Trail along the border of the park for a couple kilometers, until it parts ways with the Bruce and then runs north-east towards the main north entrance, and loops back to just north of a central trail hub in the park centre, then returns, paired once again with the Bruce Trail.

During the 3 hours hiking this trail, I only encountered one other hiker, early on. It seems not many go as far to do the whole loop. A lot of interesting problems were encountered with this trail -- sometimes it was too muddy to walk on safely, and sometimes it was too slippery with ice. Both these problems happened in the valley climbs, and whether there was mud or ice just depended on if that side of the valley had sunlight or not.

A couple areas of the trail with sharp turns were missing blazes. One of them lands you in a vineyard if go the wrong way! If there are any faults with this trail, it would certainly be the lack of blazes, specifically in the non-Bruce Trail section.

Before I mention the birds I saw on this day, it's worth noting that this trail features some really healthy Eastern Redcedars. Having hiked a lot of trails along the Niagara escarpment, I'm used to seeing mostly Eastern White Cedar as the ubiquitous false cedar.

Early on in this hike I encountered a 2013 first -- a Northern Mockingbird. In seeing this bird I had one of those instinctual "oh, that must have been a mockingbird" followed by a second-guessing "but there's other birds that are grey, shy, and common to this region...", followed by a good photo and iBird app confirming my initial instincts. What certainly didn't help was that this bird seems to the world's most quiet mockingbird. It never sang a single note! If you've heard one before, you know they can be very obnoxious and will mimic just about any other birds' song.

Later in the day, more unexpected bird encounters included a singing Song Sparrow, and a group of Eastern Bluebirds in the cornfield.

Starting off day two, I first checked for the owl in the south entrance (no luck!) then proceeded to park at the Pelham Road entrance on the north end, and begin the loop that is the Black Walnut Trail. This trail, much like the Swayze Falls Trail has mixed terrains, but for the most part wasn't as hilly and has long sections of old roads. I would certainly say this trail is easier than the Swayze Falls Trail in many ways, though during icy and muddy conditions is certain not for the novice hiker.

Highlights included some beaver dams in the north-west section, and the bird nesting boxes near the trail hub in the centre of the park. I was pretty lucky to get there at the right time when several bluebirds were singing and dancing. The males were doing this strange sing-while-flapping-wings dance around the females. Sometimes while standing right on top of the nesting boxes.
Terrace Creek Trail (blue trail #6)

Since the Black Walnut Trail was shorter than day one's Swayze Falls Trail, I added in one more hike, and that was the western loop of the Terrace Creek Trail.

While this trail is clearly marked for hikers only (no equestrian or bikes), the north-western wing of this trail should also be marked for experienced hikers only. The trail begins innocently with a nice looking metal bridge, then leads up a hill as a v-shaped rut with running water runs right down the middle of the trail. This section should probably be closed and re-routed in my opinion, as I can't see any easy way to repair the erosive damage done to this trail. It is thankfully possible to step up to the side of the trail along an alternate path taken by smarter hikers, but even that path is not the safest of trails.

The second tough part is a large valley with a set of stairs going down to a bridge. The stairs and bridge were fine, except that getting to the stairs required walking down very steep icy trail or very steep muddy trail. Mud is easier to keep a toe-hold than ice by far, so I took that route -- that said, I'm not sure why the stairs don't go further up to avoid this problem.

The southern leg of this trail is much, much safer. It also has a really nice short waterfall that you can get very close to the top or bottom, safely.
One other nice feature of the southern section is a mature stand of Eastern Hemlock. With most of Southern Ontarios forests cut down in the last 100+ years, there are few healthy stands of hemlock like this remaining. 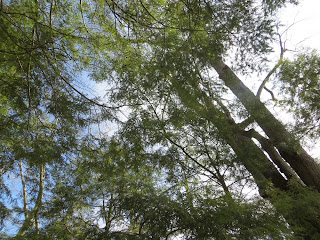 * Heard these but didn't see them. Also, both had not been reported ever in any month before... which makes it all the more annoying that I didn't see or photograph them!

Conclusion: this was a pretty good idea. I think in the future I'll plan out some of my hikes based on not just adding trails to Google Maps (I'll run out some day anyways), but also to improve eBird's data for popular birding hotspots that have month-wide gaps. Or, if I want to be competitive, try to beat records and find more species in a month than have previously been reported for a location.
Posted by Unknown at 12:18 AM